What goes around comes around

Career satisfaction comes in all shapes and sizes; while some will be satisfied by acknowledgment or praise, others will find it through professional advancement and upskilling. For many Specsavers joint venture partners (JVPs), they find it in teaching and supporting each other through an initiative called Pay it forward.

Established two years ago, Pay it forward is described by the multiple as “an initiative based around making JVPs across the group much stronger by helping each other out.”

The concept was the idea of two JVPs themselves, Matt Stewart and David Stockton, who were the first JVPs to join the company’s board of directors.

Pay it forward tasks can be clinical, dispensing or retail based. They can range from mentoring or being a buddy to new partners, to job sharing and secondments designed to support each other.

Pay it forward in practice

A JVP of three practices — Kettering, Corby and Oakham – Mark Turner has been involved in Pay it forward since it launched, both sharing his own skills and learning from others.

“I got involved in the initiative pretty much straightaway,” Mr Turner told OT, adding that around 50% of the directors in his regional division did so as well.

Positive about the concept and his experiences of it, the director explained: “In the past a lot of partners have believed that the biggest threat to a Specsavers is the nearest Specsavers. But what we should understand as partners is that we are greater as a group and together we are a lot stronger than we are on our own.”

“Therefore, Pay it forward is really about doing a lot more to help each other out without necessarily receiving reward or payment. The theory is that if you all behave in that way, it will come back around,” he added.

"I've always got a buzz out of retail and I thrive on helping to enhance and improve other stores. They have directors who are working hard day-in-day-out, but no one can be a specialist in every area"

Through the initiative, Mr Turner has both given and received to the benefit of his business and on a personal level.

A “retail man” by his own admission, Mr Turner’s Pay it forward “givings” have been based around stock, inventory and product.

“I’m a retailer, so while I don’t get involved when it comes to the clinical side of things, put me on the shop floor, be it in marketing, product or point of sale, that’s my thing and that’s what I’m good at,” he said.

Providing an example of a successful Pay it forward initiative that he has been involved with, Mr Turner recalls a trip to Kirkby to support fellow JVP, Tim Eckersall.

“Tim runs a relatively small store and when you run a small store there is always difficulty when it comes to stock,” the director explained.

“Due to size, Tim felt compromised and was struggling with large quantities of stock being left in cupboards,” Mr Turner told OT, explaining that, “when a new range comes out, everyone loves the new product and we have to get it out, but that means stock then has to come off the shelves.”

“While you end up selling the new frames, the old frames never find the light of day. The next range comes out three months later and the same thing happens, and before you know it people have 3000 frames in the cupboard,” he added.

Sharing his retail expertise with Mr Eckersall, the duo, together with Kirkby employees, redesigned the store and managed to get 300 more frames on display. “For a small store, that is a massive increase,” Mr Turner confirmed. The partners also introduced a system for how discontinued and old product flowed through the business.

Within the first quarter following Mr Turner’s visit, cost of sales had fallen, and “Tim was over the moon,” he shared. 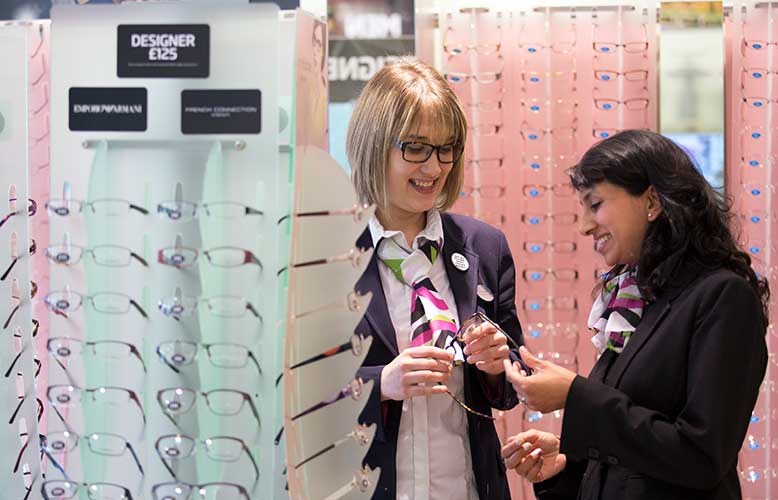 The time Mr Turner spends supporting other practices means that he is absent from his own businesses more and more. However, he points out that this has positively impacted on his team, explaining that they have “flourished” in his absence and “relished” the responsibility.

“I’ve stepped away from some of my stores a little more because of what I’m doing with Pay it forward. This has actually meant that my staff have been able to learn and excel without me. It’s worked both ways,” he shared.

“In my absence, my staff have become empowered to step up and in turn have become more knowledgeable and engaged. They have proven themselves to be more capable than I thought. As a result, I have ended up with a team where everyone is stepping up and achieving,” he added.

Mr Turner is very honest and while he acknowledges where his skills lie, he also acknowledges his weaknesses, as a professional and as a business. Consequently, the director has also embraced the Pay it forward concept in order to learn from fellow directors too.

“Everyone has something to offer,” he said.

After observing a relatively low dispensing average in one of his stores, Mr Turner enlisted the expertise of fellow director, Paul Cooper.

He explained: “The demographic in one of our stores doesn’t lend itself easily to a high spend and try as we might, we struggled. Paul’s store in the West Midlands has a similar demographic, but his practice’s average dispense was around £7 more.”

Mr Cooper visited Mr Turner’s practice and shared insight into the processes that his staff deploy. Together they shared these methods with the director’s team and retrained them in these skills with success.

Reflecting on his career and the satisfaction he has received by getting involved in Pay it forward, Mr Turner said: “I’ve always got a buzz out of retail and I thrive on helping to enhance and improve other stores. They have directors who are working hard day-in-day-out, but no one can be a specialist in every area. So I really enjoy going into a store, like Kirkby for instance, and saying ‘right, you do brilliantly on all of these things, but you don’t succeed in this, and this is how you can improve.’ Seeing them succeed thereafter is a brilliant feeling for me, and I know that the brand and the company is better for it as well.”