I was introduced to optics because my eldest sister suffered from a number of eye conditions at birth. When she was born she had a high degree of myopia, amblyopia and a divergent squint. She is now registered blind.

My mum and dad were friendly people and became close friends with my sister’s then optometrist, Constance Robinson, who was known as ‘auntie’ Constance in our household. Therefore, at the age of 16 when my father asked me what I was going to do when I left school and I didn’t know, I went to see auntie Constance for advice. Constance told me categorically that I would be an optometrist.

I studied optometry at Glasgow College of Technology, which was more than 320 miles away from where I grew up in Coventry. Back in those days there was no such thing as the internet or mobile phones, and I remember being very lonely…for about six hours. I can honestly say that the people who I met in the halls of residence on my first day of university are still my best friends today.

I took up a pre-reg position with Scrivens Opticians in Wolverhampton but, remembering Constance’s time in the hospital setting, I applied and secured a one-day-a-week placement at Midlands Eye Hospital too.

I spent Monday’s at the hospital, which was contact lens day – this was when I first began learning and using a multitude of different contact lenses. With the exception of the first few years of opening my own practice, I have maintained one day a week at Midlands Eye Hospital and then University Hospital Coventry and Warwickshire since my pre-reg year.

"Those that stand out are the patient success stories such as...the eight-year-old with anterior segmental agenesis whose personality and quality of life completely changed when I fitted him with a scleral painted lens"

In 1987 I opened up my own practice in a less affluent area of Coventry and we are still present in the same location today. While the budget I had was relatively low, I found a good shopfitting company and on our first day in business there was a queue of patients waiting to come in – it was a revelation. What I later realised is that the practice was quite ‘fancy’ in relation to what people in the area previously had.

For me, advancing my skills as a clinician has been very important throughout my career. When it got to about 1990, I decided that I didn’t know enough about optometry to take the job further. So instead of going on courses, I did a Master’s at the University of Bradford. It wasn’t about getting a Master’s per se, but to act as a refresher because since I had graduated in 1982, the profession had moved on. The point I want to make is that a lot of people feel like superman when they graduate, but the profession is moving and we need to ensure we move with it.

I have never had the drive to work for money, so the most rewarding aspect of my job is the difference that I can make to people’s lives. The passion comes from people respecting me as a clinician and wanting to see me above any other optometrist in the area. 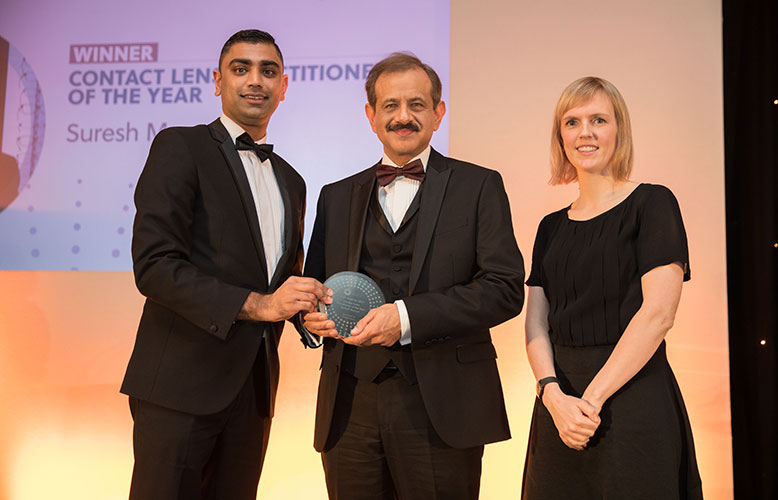 Being an optometrist is what I know, it is what I’m comfortable and the most relaxed with, and this is where I want to be. In the past I’ve tried to visualise myself working in a different role, but I can’t even see it in my minds eye.

There have been so many highlights in my career, but those that stand out are the patient success stories such as the lady who was -25.00 who saw for a quarter way down the test chart for the first time after I fitted her with contact lenses, or the eight-year-old with anterior segmental agenesis whose personality and quality of life completely changed when I fitted him with a scleral painted lens.

I’m knocking on a bit at 57 and a lot of my friends in other medical and para-medical professions are beginning to retire. While I’ve thought long and hard about this, I don’t want to do that just yet. However, I’m reducing the amount of work that I do and have been focusing on recruiting the right practitioners to help take the business forward.

I had a plan B from day one because when I told my teacher that I wanted to be an optometrist, he said that I would never get the grades. If I wasn’t an optometrist, I would have been an accountant.