More than 300 optometrists receive their diploma 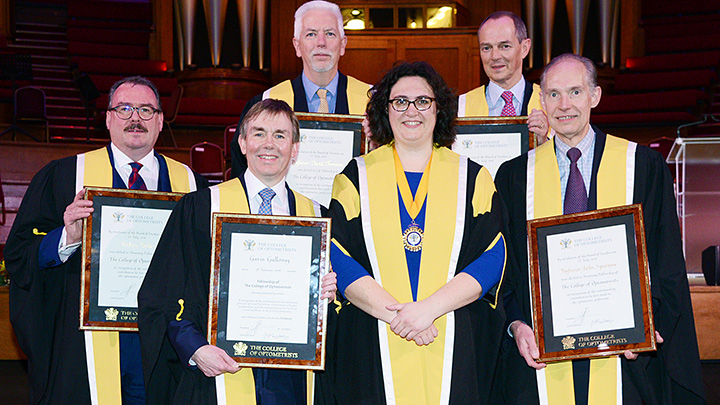 The College of Optometrists’ diploma presentation ceremony has welcomed more than 300 newly qualified optometrists into the profession and celebrated the achievements of experienced practitioners by awarding Higher Diplomas, Research Excellence Awards and Fellowships.

During the event, which was held at Central Hall in Westminster, London on Tuesday (8 November), the College awarded Life Fellowship to both Professor David Thomson and Professor Martin Rubinstein.

Professor Thomson was recognised for his “extensive contribution to the education and training of optometrists, and to research and technology developments which have benefited the optometric profession as a whole.”

Professor Rubinstein was awarded for his “extensive contribution to the education and training of optometrists and ophthalmologists, his role in the development of hospital optometry, and his significant contributions to research.”

Awarding the fellowships, College president, optometrist Dr Mary-Ann Sherratt, reflected: “Fellowship is the College’s highest qualification and it is an acknowledgement of commitment to the profession, experience and accomplishments.

“It was an absolute privilege to present these awards and acknowledge the hard work, commitment and exceptional contribution these individuals have made to advance optometry and eye care.”

As part of the College’s commitment to supporting research, it annually awards four accolades in recognition of the practitioners’ research contributions.

During the ceremony, Dr Andrew Logan was presented with the George Giles Postgraduate Research prize, while Dr Richard Armstrong received the Bernard Gilmartin OPO Award. The Phillip Cole Prize and the Neil Charman Medal for Research were awarded to Nicholas Rumney and Dr Julie-Anne Little respectively.