Not many newly qualified optometrists would have the skill set and confidence required to set up a practice just nine months after qualification, yet that is what optometrist Dan Varcoe did.

However, speaking to Mr Varcoe, it becomes clear very quickly that he is not your ‘average’ newly qualified optometrist.

“I started out in optics around 10 years ago now. First I qualified as a dispensing optician and then I spent some time managing a Vision Express practice, before returning to university to train as an optometrist,” he explained.

Completing a somewhat remote pre-registration placement at an independent practice on Jersey – an island with an estimated population of less than 100,000 – it was not uncommon for the electricity to fail and bad weather to halt flights, as the optometrist shares stories of cancelled pre-reg assessments as the examiner could not reach the Channel Island.

"When I qualified, I had a number of different career options that I wanted to consider – stay in Jersey, go 'home,' or try something totally different"

Qualifying in September 2014, Mr Varcoe said: “When I qualified, I had a number of different career options that I wanted to consider – stay in Jersey, go ‘home,’ or try something totally different.”

For Mr Varcoe, a south west coastal town in Cornwall won out and he returned ‘home’ to join a local independent practice.

Uncertain about the exact career path he wished to take, Mr Varcoe was set on his journey to practice manager and resident optometrist of a standalone, brand new Boots Opticians practice in Falmouth after a call to a recruitment agency.

"It was one of those situations where one thing led to another and I was offered the opportunity to manage my own practice,” Mr Varcoe told OT.

“I really liked the idea of being in a practice from the very beginning and having the opportunity to build the practice up from scratch,” he added, expressing that it was too good an opportunity to turn down.

All sparkly and new

The practice, previously a Claire’s Accessories, spans three floors and is based on Falmouth Market Street, sharing the High Street with two other opticians.

Recalling seeing the premises for the first time, Mr Varcoe said with a laugh: “There were rooms and walls but nothing else.”

He and his practice team gained access to the premises a week before opening. Discussing this, Mr Varcoe said: “When we walked through the doors, there was a practice; it had shelves, but no glasses. It had rooms, but no equipment. We just hit the ground running and it was a great team-building experience.”

“On day one, we walked in and there were various deliveries, so as a team we began unpacking and putting things where they needed to be. Technicians came in and installed a lot of the equipment and checked everything was working. Then when the frames arrived, we had hundreds and hundreds of spectacles to unpack and put in their right places,” he added.

As practice manager and resident optometrist to four staff, Mr Varcoe’s days were anything but routine.

“I was running and managing a practice and briefing the team, was involved in staff recruitment and training, as well as health and safety. Also, as the main optometrist, I would be testing four to five days a week too,” he revealed without taking a breath.

Mr Varcoe is happy to share some of the lessons that he has learnt through his journey into practice management.

“We certainly could have been a lot more organised on opening, planning ahead and booking some patients into the diary in advance,” he said. “If we had done that, there would have perhaps been a more natural task flow. Once the practice was ready and open, we were sometimes looking for tasks to do.”

If he were to do opening day over, Mr Varcoe would most certainly host an official opening day party and invite public figures such as the mayor, he said.

One thing that Mr Varcoe and his team did do ahead of opening was knocking on the doors of local businesses. “I made sure that I popped around to the two other local opticians to say hello and be friendly, as well as the other stores on the High Street – it’s beneficial to have a local network around you,” he explained.

Mr Varcoe’s practice team is varied – on opening day, some had a couple of days of optical experience, while others had 10 years. This variety is something that the optometrist endorses: “It’s great to have a varied team as those who have a little bit more experience can help others progress.” 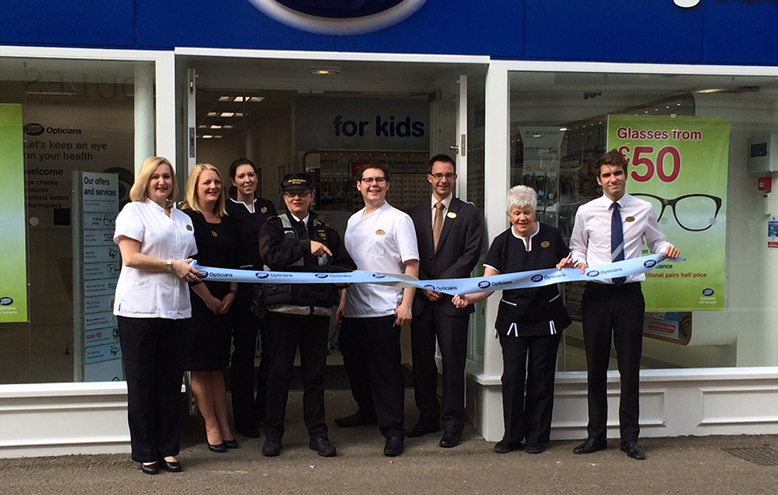 Practising what he preaches, he personally aided the development of individual team members too, which is demonstrated through supervising the practice’s trainee dispensing optician.

Sharing some of his personal team management tips, Mr Varcoe said: “Every team is different, you have to get to know your team and understand what works for each individual and make sure that they work well together.

“Give them tasks that they can achieve and perhaps give the more challenging tasks to the more experienced people. Tailor it to people’s strengths so they get the right things and can do well.”

With the practice already blossoming one year after opening, Mr Varoce had a difficult decision to make. “The practice was getting busier, but it wasn’t growing in the way that I had anticipated and I was finding it difficult to manage from inside the testing room,” Mr Varcoe admitted.

“Staff need to know who their manager is and in that management to have consistency in their presence,” he explained. “I simply couldn’t look after the staff and help them develop in the way that I wanted to when I was testing so much,” he added.

"Every team is different, you have to get to know your team and understand what works for each individual and make sure that they work well together"

In June, Mr Varcoe decided to take a step down from his management position and moved practice – he is now an optometrist at Boots Opticians’ St Austell branch. “In making the decision to leave, I did so because I knew that the assistant manager was more than capable and would be able to take the team and the practice forward from the shop floor, which makes all the difference.”

Mr Varcoe is currently focusing on building upon his clinical skills. Having completed the College of Optometrists’ profession certificate in medical retina, he is now applying to study towards a professional certificate in paediatric eye care. He is also continuing to support the development of his colleagues professionally and will begin supervising a first year trainee dispensing optician in September.

Would he do it again? “Yes,” he smiles, “in slightly different circumstances and with some more experience, I’d definitely do it all again.”