Amy Thompson, optometrist and secretary of Cheshire LOC, and Jill Umpleby, dispensing optician and the LOC CPD officer, explain their involvement in an atrial fibrillation stroke prevention pilot that has been running in East Cheshire since November 2020

Could you tell me about the pilot overall, and its general aims?

Amy Thompson (AT): It’s one of NHS England’s objectives to try and reduce the stroke risk in East Cheshire, and to pick up atrial fibrillation (AF). If patients are treated for AF it can mean that if they do later have a stroke, it can be less life-altering. The trial is all about trying to reduce the burden on the NHS. If they can pick up a stroke and reduce it or reduce its severity, it ultimately costs the NHS less than if they had a full-blown stroke and needed a lot of rehabilitation.

Wilmslow is quite an affluent area of East Cheshire. The only other time you’d maybe have been screened for AF was if you’d had previous medical interventions. It might be that the people in Wilmslow see themselves as healthier. There’s certainly a lot more private gyms in the area than in other areas of Cheshire. If you have other conditions as well, for example if you’re diabetic, you might have already been screened for AF at appointments for that. So that might be a factor.

Jill Umpleby (JU): I haven’t got the final numbers of how many patients we’ve tested overall. Last time I checked, a few months ago, it was around 390. Personally, I’ve done 148 tests and referred 20 people. That’s nearly 15%.

Strokes are one of the worst health problems in Cheshire East, and we averaged 10% of patients referred across our other two practices, but it seems to be higher in the Wilmslow practice. We test all over 60s, as long as they don’t have a pacemaker or any previous heart conditions, and I even test people waiting for patients. If I find I’ve got a few minutes, and there’s somebody sitting waiting who is obviously over 60, I ask them if they’d like to take part in the trial. They usually do.

The trial was supposed to be for 12 months, but because it’s been quite successful, NHS England is happy for it to continue.

In terms of being involved with the trial, what do you hope that the long-term outcomes will be?

AT: Jill is finding that in her practice, she’s getting the same people who she tested a year ago back. Her numbers are dropping off, because you only need testing once. So, if it was at other sites as well, like dentists and pharmacies, we would be able to reach other people, whilst keeping it in that primary care setting. COVID-19, and certainly some of the enhanced services like the COVID-19 Urgent Eyecare Service (CUES), have meant that we’re working together more with primary care. I think this is another scheme that can join in with that.

JU: We’d love it to be rolled out further. The more opticians that take part, obviously the wider area it would cover. But we also think it would be good if dentists and pharmacists did it as well, and then it would reach even more people.

I’ve already tested a lot of the people who are now coming back into the practice for appointments, so there are fewer people to test. Quite a lot have already got heart conditions or they’re already taking medication, for example blood thinners. So, the numbers seem to be dropping.

As part of the testing, there were a couple of diabetic patients that I picked up with AF. I didn't catch them all, so I’m hoping to catch the ones that I didn’t see the first time round, and the two-yearly patients, as well as any extras.

Is it something that you would want to do more of in the future – take on things that are not specifically optical, to benefit the community?

AT: I think there’s a fine line between being a busy enough practice that you’ve got the footfall, but not too busy that you then can’t do these personalised services at the same time. There’s definitely a balance. A lot of these schemes work best when it’s front of house people doing it, but of course a lot of the time if you are understaffed, and especially because of COVID-19 staffing problems with isolation or family isolation, it’s quite difficult to take on additional roles. But certainly, speaking to our committee and our members, there are a few practices in Cheshire that are willing to diversify away from optics, as long as the funding is right and it’s a worthwhile project. The funding has got to be in place.

If patients are treated for AF it can mean that if they do later have a stroke, it can be less life altering

A lot of our front of house staff are very keen to upskill. We’ve seen that in the past, with things like taking on diabetic and field screening. But I think, at the moment, it’s a case of everyone mucking in and covering people who are off. Hopefully, as things settle down COVID-19-wise, it’s something going forward that can be added to that opportunity list.

AF testing is really useful – it is very quick and easy. But I don’t know whether, if you start taking on things like blood pressure testing, it’s different. Yes, it would be great to do it. But you’d have to have a different room. I think it’s going a bit more to the extreme. A lot of patients don't know what AF is, so, I think it’s more useful for us to do AF than, for example, blood pressure.

On the theme of practices wanting to take on work that is not specifically optics focused, is that something that you would encourage other practices to do? Would you say it is a positive thing for practices to look at being involved with?

AT: I think there’s got to be a link back to sight, and an easy way of talking about it, like there is with smoking cessation. A lot of the time we talk about smoking, and we can link it in with risk factors with sight. I know AF doesn’t directly link, but we do ask about general health and stroke risk comes into that.

Going further, to things like blood pressure, I think might be a step too far. Places like pharmacies are set up better to do that; they have separate rooms. I think advertising that these services are available in the community and in optometry practice would be a great place for promoting those services. Saying, ‘You know, you can go to the pharmacist instead of the GP for blood pressure and minor ailments,’ a bit like we do with CUES. But I think it’s got to be quick, which is why the AF fit in quite well. It’s got to be the right type of service.

This is an NHS England commissioned trial. Have you learned things from working closely with them?

AT: One of our ex-members was on the committee, so he’s a close link with NHS England and it was him that initiated the pilot and came to us saying that he’d like to do it in his old area. So yes, we’ve always had a really good working relationship with NHS England. The funding can be slow to come through; there are hoops they have to jump through. But it’s all promised, and it is there. NHS England, I feel, are trying to push forward these schemes and trying to help involve optometry as much as they can.

What has the response from patients been? Have people spoken to you about having AF testing in the practice, and how convenient it is? 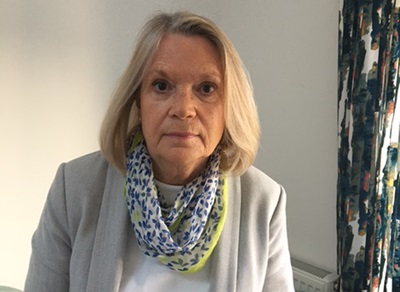 Jill Umpleby
JU: Everyone I’ve tested has agreed that it is a brilliant idea. They’re happy to take part, and they’ve obviously told other people about it, because I do get people coming in saying, “Oh, my friend had her AF tested here. Are you still doing it?” So, they’re obviously asking for it. I’ve had a lot of positivity.

At first, we weren’t supposed to be asking for feedback. We should have done, I think. But people have come in of their own accord and said, “Thank you, I’m now on medication,” giving us informal feedback.

It definitely raises the profile of the practice. It’s not just eye care – you’re looking after their overall health as well. Patients weren’t going to the GP during COVID-19 at all, so that’s when they were especially appreciative. They were saying, “Thank goodness we’ve had this done here, because we can’t get into the GP.” It was helpful during COVID-19 for that reason.

If a bigger company would train a person per practice to do these extra things, that would be ideal. It’s whether we can persuade them to train front of house staff or dispensing opticians. It’s not feasible for optometrists to do it, because they’ve got too many things to do already. I think if it was put to reception staff in the right way, with emphasis on upskilling and reward, more people would take it on.

What learnings have you taken from this experience?

AT: We had a meeting with GP practices over in a corner of East Cheshire, who were doing their own opportunistic testing of AF. That was really interesting. GPs are really pushing for preventative care and screening, but even they found it difficult to find time in their days to do it. So, I think a lot of schemes that will show a cost saving to the NHS and to patients have got to be done on more platforms than just GPs: optometrists, dentists and pharmacists all working together to try and prevent disease, rather than always trying to pick up the pieces afterwards.

Putting optometry in with the other healthcare professions is, I think, what NHS England is trying to do – to get us into those meetings and get us talking with fellow healthcare professionals. On AF testing in particular, if other areas outside Cheshire can get the gist of what it is and why it’s important, that would be great.

JU: I didn’t realise there were so many people at risk of stroke. I have learned that. I think a lot of our patients have learned that too. I think they’re all really surprised when I say I’ve referred 20 people already. They realise they’d better have it done too. It’s definitely gone down well in our practice, with the patients.