“The majority of new patients arrive on recommendation”

Karmelo Modina, owner of North London independent Eyes on Broadway, on changing his business mindset and taking on a 130-year-old practice

Taking over any historic business is a challenge – but doing so right before a pandemic, with a child on the way and other business commitments to consider, could offer a bumpier ride than usual.

However, in the not-too-distant past, that is the situation that London-based optometrist Karmelo Modina, along with his wife, Sifa, found himself in.

The former H R Breakspear Optometry, now Eyes on Broadway, had been a feature of Muswell Hill since the 1930s (before that, the practice had been in Piccadilly Circus since the 1880s). So, how did the Modinas feel taking over such a long-established business?

“Longevity is only possible,” he believes, “if there is a commitment to providing a high level of expertise consistently, and rarely will you find an establishment that has served its community for over a century.”

He added: “To step into such a cherished practice means not only taking on its reputation, but having the foresight and ingenuity to take it to the next level.”

Modina explained that he and his wife recognised the need to rebrand slowly, initially changing only the clinical services that they were providing – bringing in BlephEx, ortho keratology, visual stress and myopia control clinics – before altering any of the practice aesthetics.

The reasons for this were clear: “Patients feel secure in familiarity,” Modina explained, “and we felt it would be unwise to over-stimulate them with a brand new shop-fit on top of the new faces they were being welcomed by.”

He added that the practice kept its old name for two years before the pandemic, then, “after working tirelessly to survive the worst of it, we realised that we had earned the self-esteem and belief in ourselves to step out of the shadow of previous ownership and proudly change the name for good.”

The practice rebrand has been embraced by the Muswell Hill community. Modina said: “With the introduction of new services and modernisation on multiple levels, the response from existing patients has been fantastic. The practice now has a stronger online presence, which has attracted new clientele, but the majority of new patients arrive on recommendation – which gives us confidence that we are doing our best.” 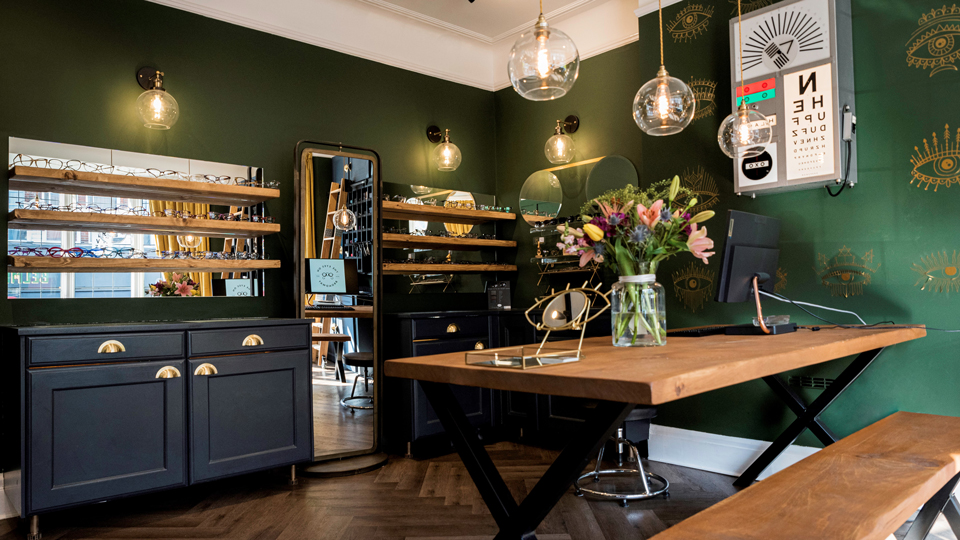 Aside from the practice, Modina also runs Out of the Box Optics, which he said “was born out of frustration and the yearning to discover what optics had to offer beyond residency on the High Street.” He described the business, which works primarily working with undergraduates and pre-reg optometrists and runs the Optoversity Challenge, as “a platform that links others to their dream role, or at the very least supports those who feel uncertain about their future.”

With Out of the Box Optics growing (plans are afoot to launch a charitable foundation, and a longer-term goal is to expand to elsewhere in the world), did he ever feel like he might be taking on too much?

As alluded to with mention of the pandemic, it has not all been plain sailing. In fact, Modina openly admits the toll that taking on practice ownership alongside his other commitments had. He explained: “I found out I was going to be a father at the same time, and instead of finding balance I developed an unhealthy mindset, believing I could be the best at everything, in all domains of my life and at all times – which only served to spread me too thinly, taking its toll on me physically.”

Now, he said, he “aims for effectiveness instead of efficiency, which offers me more time to ‘rest and digest’ and work more sustainably.”

With his working mindset improved, what are the aims of the new practice? “We want every single person to feel as if their visit to us was the best thing that happened to them that day,” Modina said.

For Modina’s wife, practice manager and lead dispensing optician, who also works at Moorfields Eye Hospital, opening Eyes on Broadway is the realisation of a long-held ambition. “Owning a practice is her dream,” Modina said, “so it’s probably best to say that she opened the practice with me, not the other way round. She has talked about this since we first met at university.”

How do you want patients to feel when they step into Eyes on Broadway?

How have you built relationships with other healthcare professionals in the community?

Local GPs now have a better understanding of our role, following a series of training days we organised with local surgeries. This has certainly helped with referrals to our clinic.

What is your top tip for running a practice?