Optometrist Roshni Dalia ventured into practice ownership at the age of 27 when she purchased Notting Hill Gate Opticians. 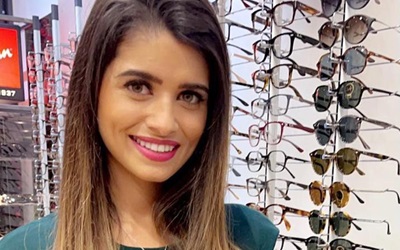 Earlier this year the business owner was recognised in Small Business Britain’s #ialso100 campaign, a list celebrating 100 female entrepreneurs. Describing the recognition as “truly honouring,” she shares her journey into practice ownership with OT.

“It was always my ambition to become a practice owner,” Dalia told OT.

Qualifying in 2012, Dalia initially worked as a resident optometrist at an independent opticians, before venturing into locuming.

Crediting her early experience in independent practice for giving her the confidence to realise her ambition of becoming a practice owner, Dalia shared: “I learnt a lot about running a business in my first year after qualifying, when I worked for an independent practice. The owner had two stores and purchased a third while I was working there. I was able to observe how he ran the businesses, his relationships with staff and how he adapted the practices to change with the latest trends.”

Speaking about her then boss, Dalia explained: “He inspired me every day and gave me confidence that one day I’d be able to fulfil my dream of becoming a practice owner.”

In order to prepare herself, Dalia later left her resident role and began locuming in a variety of independent and multiple settings in order to develop her “optical and commercial experience within businesses with different strategic objectives.”

She shared that at times she was working seven days a week in “as many different practices as possible.”

“This killed two birds with one stone,” Dalia explained. “It helped me earn as much as I could, which I could later invest in the practice, and it gave me insight into how people run practices differently, which enabled me to better gauge what type of systems I wanted to incorporate into my practice and what type of service I wanted to offer.”

While Dalia felt that becoming a practice owner early in her career would enable her to dedicate all of her time into building and growing the practice as she had no commitments, she did not rush into things and was willing to wait. “My priority was to search for the right opportunity,” she said.

Realising her goal in 2018, Dalia described receiving the keys to her practice as “surreal, scary and exciting all at the same time. I remember suddenly feeling a weight fall on my shoulders as I felt the keys fall into my hand.”

Always on the lookout for the right practice, Dalia would keep an eye out for practices up for sale via business management consultancy website, Myers la Roche. And when she came across an advertisement for Notting Hill Gate Opticians 2018, she knew the time was right.

Based in a leafy and affluent area of West London, Dalia describes Notting Hill as a “multicultural area with a fashionable, charming reputation.”

A key reason she opted to purchase in the area was its “unique demographic, which included elderly patients, school children and families,” she told OT.

Although Dalia’s desire to become a business owner was driven by the freedom associated to operating her own practice, she was particularly attracted to Notting Hill Gate Opticians as it afforded her the opportunity to evolve and grow an existing business.

Buying an existing practice allowed her to put her "own personal stamp on the practice.”

By her own admission, Dalia had no business experience before becoming a practice owner. However, she had worked hard to prepare herself during her early career. Yet there are some things that you can never prepare fully for and Dalia admits that there were many surprises along the way.

When purchasing the practice, Dalia was assigned an existing lease for the building that the practice is based in, which came with difficulties that she attributes to her age and lack of experience.

“In the end I had to give a six-month rent deposit instead of the standard three months, which was money that I could have been spent on new equipment and stock,” she shared.

While she found NHS bureaucracy “quite smooth,” she admits that the “lengthy process” involved in applying for an NHS contract meant that as completion neared, she grew concerned about being unable to offer NHS eye tests and the impact that this would have on the continuity of care for her patients. Similarly, it took time to get things such as a card machine set up.

“Fortunately, I had a really good relationship with the previous owner, and was lucky because he offered to allow me to operate under his contract until mine came through,” she shared, adding that he also allowed her to use his card reader.

There’s no black and white way of running a practice, it depends on a number of different things… Something that might work really well in one practice, often doesn’t work at all in other practices

“This was so valuable as otherwise I wouldn’t have been able to offer NHS eye tests or take card payments for over a month. Both of which probably would have lost me some patients,” she said.

On taking over the practice, Dalia meticulously planned a new brand identity, which included a new logo and ethos for the practice. She taught herself how to design a website, and introduced online booking functionality to enable customers to book an eye test out of hours. She also designed price lists, business cards and appointment cards featuring the new branding.

Offering advice to others considering practice ownership, she advised: “There’s no black and white way of running a practice, it depends on a number of different things, including location and clientele. Something that might work really well in one practice, often doesn’t work at all in other practices.”

As a relatively new business owner when the pandemic hit, Dalia said that when the first lockdown was announced she was initially in denial. “Nobody knew how serious this virus was back then and I was adamant that we’d never have to close. Then, after working seven days a week for two years, I suddenly didn’t know what to do with all my spare time,” she shared.

Initially the practice opened for urgent and emergency care only, with patients triaged via telephone and video consultations to decide if it was necessary for them attend in person.

“Going from a face-to-face service to offering remote consultations was something I had never thought possible in our industry, but we had to do it for the safety of our patients,” Dalia explained. “We even dispensed a few pairs of glasses for existing patients over WhatsApp and email, and delivered them to the patients’ houses so they could adhere to the ‘Stay at home’ guidelines in place at the time,” she added.

Many changes were required for when the practice was able to reopen its doors, and she ensured that a full risk assessment was conducted and also completed the AOP’s infection control and prevention certificate.

The optometrist explained: “First and foremost, my main priority was to ensure the safety of all our customers, staff or anyone else entering the practice.”

As a result, testing times were increased to one-hour “to ensure we had sufficient time to thoroughly sanitise equipment and contact surfaces in between each patient.”

“We made sure we had ample personal protective equipment available,” she continued, adding: “We also put social distancing guidelines up in store and only allowed a maximum number of patients in the shop at any one time. Screens and hand sanitisation points were established on reception and dispensing desks, and we placed a breath shield on our slit lamp.”

Speaking about the last 12 months in practice, Dalia said: “You can never predict what’s around the corner.”

What do you most like about being a practice owner?

I enjoy the freedom in terms of operating the practice; I am in a position where I can analyse my demographic clearly and make key decisions based on my patients’ needs and requirements to ensure they feel truly valued.

What has been the biggest surprise as a business owner?

The overwhelming sense of togetherness and the community spirit with not just our patients but also local businesses.

What are your three tips for purchasing a practice?