Optometrist, Sophie Patel, speaks to OT  about how she achieved her goal of becoming a practice owner and reflects on working during the pandemic

When optometrist Sophie Patel enrolled to study optometry, her long-term goal was to become a practice owner.

“I went into optometry wanting to have my own practice one day,” she told OT. 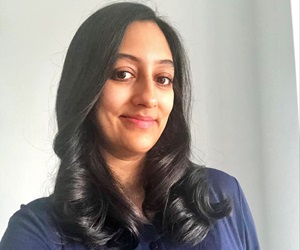 Optometrist, Sophie Patel
Aware that it would take hard work and dedication to realise this goal, the optometrist set about developing professionally to ensure that, when the time was right, she was confident enough in her clinical and commercial skills to make the transition.

Mrs Patel’s serendipitous moment came just four years after qualification, when in 2018 she was offered the opportunity to become the optometric director of a new Specsavers practice in Portslade, Sussex.

Having relocated to the coastal town for personal reasons a year before, the practice was located just three miles from her new home.

Recalling the moment that she received the keys to the practice, Mrs Patel said it was “completely indescribable.”

“I went into optometry because I wanted to have my own practice one day. So, when I got the keys to the store it was really overwhelming. What I wanted to do had finally come to fruition and I was raring to go.”

Mrs Patel qualified in 2014 after completing her pre-reg at Specsavers in Ealing Broadway, London. A year post-qualification, she began to broaden her experience by practising in different practices. “Working at different practices enabled me to see how things were done differently and gave me ideas about how I would do things,” Mrs Patel explained.

While brimming with ideas, as an employed optometrist, Mrs Patel felt that she could not contribute as much as she wanted. “I would look at different aspects of the stores that I was working in and identify areas that I thought could be better or more efficient. But in the role that I was in, I felt that I wasn’t able to do anything about it,” she shared.

“It really spurred me on to have the autonomy to do it myself,” she added.

Considering which path to take into practice ownership, Mrs Patel explained that she opted for the joint venture partnership (JVP) route because “you have a lot of support” in areas that optometrists would not normally be trained in.

I went into optometry wanting to have my own practice one day. So, when I got the keys to the store it was really overwhelming

“Having done all of my training with Specsavers, for me it felt like it was the right route,” she added.

By 2017, Mrs Patel felt ready to progress in her journey to become a practice owner and registered her interest with her regional manager, who put her forward for the multiple’s business ownership programme Pathway, designed to prepare optometrists, dispensing opticians and retail managers for practice ownership in Specsavers.

“He knew that there would be a new practice opportunity coming up that I would be interested in,” Mrs Patel said, adding: “It was perfect timing and meant that I had something tangible to work towards.”

Providing insight into what the process involved, Mrs Patel shared that Pathway combines a series of business-related assessments covering everything from finance to leadership, with a final project, for which she created and implemented a plan for building contact lens revenue within the practice that she then worked in.

Having completed the programme, practice ownership was imminent for Mrs Patel, who was offered the directorship of a soon-to-open practice in the area she lived in.

Recalling the lead-up to opening the practice, Mrs Patel said she was of course nervous, revealing: “I was having a reoccurring nightmare where I checked the figures at midday, and we had only taken £2. It was ridiculous, as the first day was obviously really successful. Every time we have a good day now, I always joke about the £2 nightmare. I can laugh about it now.”

It is a real sense of achievement [to have your own practice], but it is ongoing

Mrs Patel understands that business ownership will not be for everyone and highlights that it is certainly “an all-consuming passion” for her.

“It does take up a lot of your time,” she admitted, adding: “That works for me, but it has also been the biggest challenge.”

For anyone thinking of becoming a business owner in the future, the optometrist advised: “Be as selfless as possible when you are employed. Take on as much responsibility and as many roles as possible without necessarily asking for anything in return as in the end it will benefit you to have all of that experience.”

She also encourages practitioners to “put yourself out there and be proactive. And network as much as possible.”

“I still talk to a lot of my past colleagues. They are able to give me different perspectives for when I want to do something new in my store. I am able to take their opinions into consideration when I am making a decision,” she added.

And while Mrs Patel’s next challenge will be becoming a mother as she prepares for maternity leave, long-term her ambitions as a business owner are still wide-ranging.

“My store is a small, so we are growing all the time. Then it’s about becoming a director of a medium store and maybe, eventually, a large store as my practice develops,” she said

“There is a real sense of achievement [to have your own practice], but it is ongoing,” she concluded.

“We have come out the other side and are really thankful”

Sophie Patel admits that being a relatively new business owner during the pandemic has been difficult. “It was a horrible time last March,” she recalled, sharing: “My first concern was for my team and making sure that everyone was ok.”

While initially staff were furloughed, Mrs Patel confirmed that the practice has been able to retain all its employees. Since the practice doors have reopened, a wide range of new procedures have been put in place to ensure the safety of all staff and patients, Mrs Patel shared.

Social distancing signage is on display, appointment times have been extended and infection control procedures are in place. “It’s all very organised,” said Mrs Patel.

“We have also trained the team on being flexible,” she said, explaining: “We have had to change how we do things quite a lot. But it’s amazing how quickly you adapt.”

While Mrs Patel admits that it was “tough at the beginning,” she shared that “we are now managing to continue with our expansion plans.” The practice has recently employed its first optometrist and had a third testing room installed.

“We have come out the other side and are really thankful,” she added.