An unexpected opportunity into practice ownership

Dan Varcoe qualified as an optometrist in September 2014. Prior to qualification he had experience working as a dispensing optician and a practice manager.

In July last year he was unexpectedly offered the opportunity to purchase an independent practice in the town where he grew up and now lives, St Austell, Cornwall.

Mr Varcoe returned to St Austell around four years previously, having studied at the University of Bradford and completed his pre-reg year in an independent practice on Jersey. Most recently, the optometrist had been balancing locuming with practising in the hospital setting.

Mr Varcoe explained to OT that becoming a practice owner had always been an ambition of his. “[Practice ownership] was something I certainly saw myself doing, but probably not right now,” he said honestly.

“I have always liked the idea of being a practice owner due to the freedom it allows, from choosing my own products to providing patients with the level of care that I want to, rather than working somewhere where these elements are controlled for you,” he expanded.

When the opportunity arose in unexpected circumstances, Mr Varcoe realised that he could not turn it down.

I have always liked the idea of being a practice owner due to the freedom it allows, from choosing my own products to providing patients with the level of care that I want to


As a member of his local optical committee, Mr Varcoe had got to know fellow optometrist and local practice owner Danny O’Hara, owner of Blaylock Opticians, which was based on the outskirts of St Austell.

During these meetings, Mr Varcoe had spoken to Mr O’Hara about the potential of buying the business from him “five, 10 or 15 years down the line,” he said. Mr Varcoe admits that when the call came this summer, he was “more than a little shocked.”

“The call came very unexpectedly,” Mr Varcoe shared, explaining that sadly the practice owner had died suddenly, and the practice was now on the market.

Ultimately, Mr Varcoe decided that “it would have been silly not to take the opportunity,” despite it being sooner than he had expected.

The practice had a database of between 1500–1800 patients who require a new optometrist. However, Mr Varcoe realised that the practice was not in an ideal location, situated on a route out of the town, and the building in which the practice was based was listed, presenting a number of NHS sight test contract issues that he felt would be difficult to overcome.

Consequently, rather than reopening the practice in its current location, Mr Varcoe purchased the practice’s records and the search for a building began. 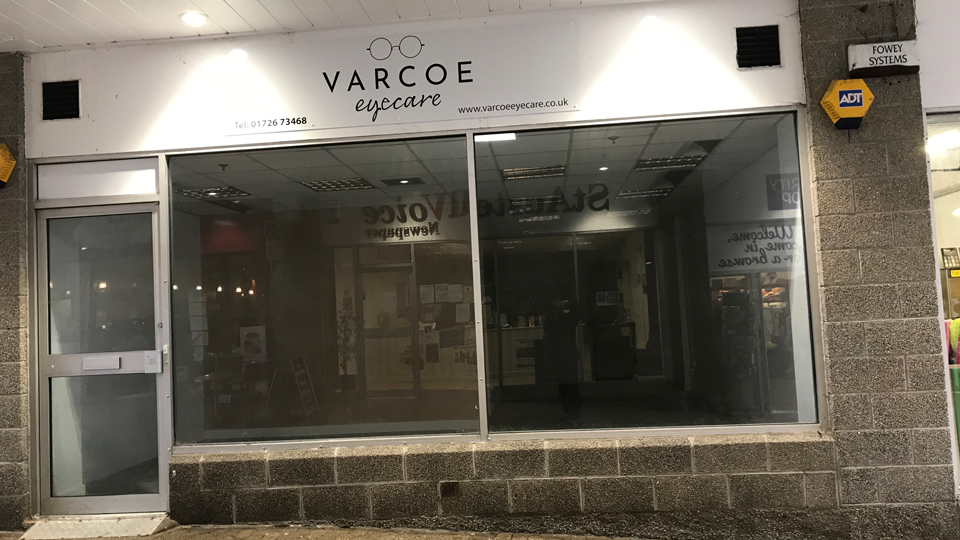 Mr Varcoe decided to set up the new practice in a retail unit in the centre of St Austell’s High Street. Speaking about the search for the right space, Mr Varcoe told OT: “We knew that we wanted to be based in the town centre due to the footfall and we began looking at what was available. Ultimately, the unit we have chosen had been recently purchased by a new landlord who wanted to let it quickly. He had some very attractive terms as he was keen to attract a long-term tenant, which was a win-win for both of us.”

After the unit was secured, the next step for Mr Varcoe was to tackle the interior of the practice, the layout, what equipment to purchase and what frames to stock.

“The layout of the practice was reasonably controlled by what we found in the building already,” Mr Varcoe shared, explaining: “We had to decide where to put the testing room. We opted to have it built in the centre against the back wall, allowing customers to walk around the full shop floor to browse.”

On equipment, which Mr Varcoe said was one of the largest investments that he had to make, the optometrist opted for a fundus camera, keratometer, an automatic lensmeter, a combi-unit and a slit lamp. “Price was something that we had to consider,” Mr Varcoe said honestly.

Finally, Mr Varcoe wanted to create a brand for his practice. On the name, the optometrist settled on Varcoe Eyecare. Understanding the area as he had grown up there, he explained: “I knew that it had to have my name included. Cornish patients like Cornish names, so we went with it.”

As Mr Varcoe had a patient-base ready and waiting when he opened, he admits that marketing has been minimal, but that what he has done has been effective. “I initially created a Facebook page for the practice and within minutes people had begun liking it,” he said. Paired with a message on St Austell-based community Facebook page, news of the practice has spread effectively by word of mouth. At the time of talking to OT in mid-November, the practice was fully booked for sight tests until mid-December.

I knew that it had to have my name included. Cornish patients like Cornish names, so we went with it

Speaking about the opening, Mr Varcoe said: “It was a bit of a relief really if I’m honest. Until the Tuesday we opened, I was planning the practice and working full-time between three different jobs. The response from patients who came to see us on our first day was really lovely and certainly made the journey worth it.”

What was the biggest surprise when becoming a practice owner?

I was pleasantly surprised at how easy it was dealing with frame and lens suppliers. I had anticipated that this may be a bit of a nightmare, but it was surprisingly simple. They have all been lovely, they have helped us out and given us some great advice as well.

How did you prepare for business ownership?

I didn’t have too much time to prepare as it all came as a surprise. It was simply a case of we either do it or don’t do it. I would advise others not to think about it too much, just go and do it.

What would you do differently?

I’m sure that there are things that I would do differently, but you almost don’t know until you have to do them again. One lesson I did learn was to keep an eye on builders. I was away when the builders were constructing the testing room space in the practice and I have ended up with a room that is a little bit smaller than I wanted it to be.