eGOS, celebrity speakers, and “warts and all” benchmarking analysis at the Newport event

“We are here, at the centre of the world, for the next three days in Celtic Manor Resort, Newport.” This was the greeting by the writer, former Conservative MP, raconteur and compere for the 2019 Optix Annual Conference (25–27 March), Gyles Brandreth.

The three-day event featured presentations from the Optix team, alongside opinion leadership from fashion, music and retail experts, plus interactive training sessions and workshops.

Opening the conference in his stakeholder update, Optix founder and managing director, Trevor Rowley, thanked delegates for their support, noting how important it was to “bring people together who are all going in the same direction.”

Mr Rowley told delegates that Optix continued to invest in its people, including a web development team that has “doubled in size” since the last meeting. This has enabled Optix to focus on key areas of activity for practices, including eGOS, audiology, and mailing and communications enhancements, he explained. 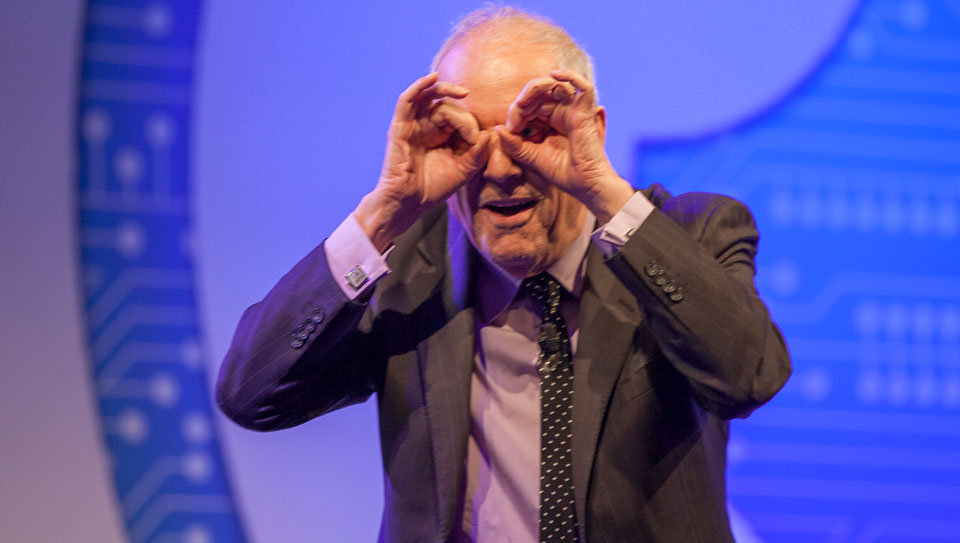 Gyles Brandreth on stage at the Optix Annual Conference

Citing “endless delays and specification changes from Capita,” Mr Rowley told delegates that he expected to see a release of the new eGOS system “this summer.”

“This is a major change in process and functionality and will affect every Optix user with an English eGOS contract,” he explained, adding: “It is vital you understand the changes and additional hardware that will be required to use the new system.”

He stated: “The new eGOS system is going to be brilliant…but it has had the gestation of an elephant.”

In his presentation, Mr Rowley previewed the company’s latest project, Optix 2.0, describing it as “next generation.

It is a complete rewrite of the system using the latest technology and designed to work across multiple platforms,” he explained.

He said his job was to bring the system online in 2019, noting: “I will do this.” He added that the reason for the delay in delivering eGOS was the “need to refine the design and the number of stakeholders involved.”

Mr Holden confirmed that at a later phase of testing this summer, early adopters will be approached to use the system to check it works, stating that “the main rollout will be at the end of the year.” He said that “PCSE still needs to get NHS partners to sign the project off.”

“We need to make sure the process is robust – we are not going to apologise for robustly testing,” he added.

Leaders from across the business world joined the conference to share their views on the meaning of success – and how to achieve it.

Farrah Storr, editor in chief of Elle, described how to get what you want by “living fearlessly.” The award-winning journalist told delegates that working in a school in Paris as a 20-year-old student forced her into her “discomfort zone,” explaining: “I had to find a way over or under each obstacle.” The experience taught Ms Storr to “discover strength I did not know I had.”

Ms Storr added that when she was magazine editor of Women’s Health, it was working under extreme financial constraints that helped her and the team to innovate. She advised delegates working on projects to consider reducing the size of the team and the amount of time available to deliver the project. “Introducing constraints can drive results,” she said.

Also presenting at the conference was Richard Reed CBE, co-founder of Innocent Drinks, and who now runs Jam Jar Investments, a company that backs young entrepreneurs; Simon Woodroffe OBE, the founder of the Yo! brand; and musician, actor and songwriter, Sir Bob Geldof. 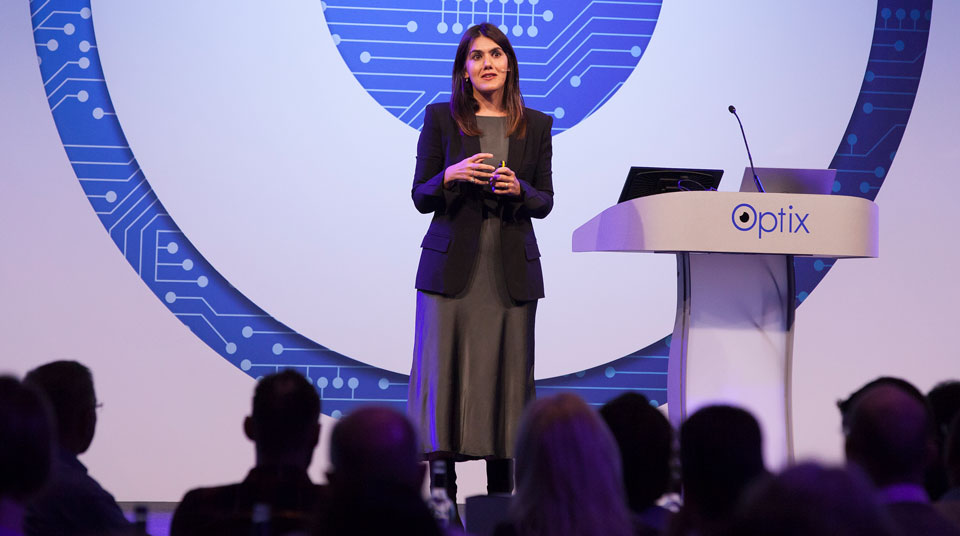 Farrah Storr talking on stage at the Optix Annual Conference

The data tells the story

Following a well-received reception in 2016, Optix’s financial director, Andrew Harrison, presented delegates with a “warts and all” analysis of the data shared by Optix customers – and his trends and lessons for customers.

Noting that Optix customers are tracking 1.17% above the benchmark set out in analyst GfK’s 2018 optics panel market retail audit data, Mr Harrison pointed to examples such as the 75% uptake of Direct Debits as a positive trend. “Direct Debits typically add 12% to a store’s income,” he explained, adding that it “improves patient loyalty and the recurring income enhances the value of the business.”

Reviewing other practice behaviours, Mr Harrison highlighted a “big movement” from recall letters to emails from 2015 onwards, but added “22% of customers are not using email, and one customer is not using recall at all.”

“Your recall structure will affect your bottom-line,” he explained, adding that appointment reminders are “really worth using.”

Reminding delegates that “our mission is to help you become stronger businesses,” Mr Harrison encouraged business owners to “benchmark internally, including store versus store and staff versus staff. Staff need to know the KPIs.”

He also advised delegates to “look beyond gross margins,” noting that it “is not a true measure of your profit and loss position.”

“You will be in a stronger place for business exit, making it easier for potential suitors to understand your business, and you are liable to get a better price,” he concluded.