Your computer will see you now…

Since July 2015, online vision tests have been available to the public across 37 states in the US through a company called Visibly.

Visibly, which until earlier this month was known as Opternative, offers those who meet its eligibility criteria the opportunity to have their vision tested in the comfort of their own home through online computer software.

Since its launch, its use by people across the US has been on the increase, with its chief technology officer, Ayo Jimoh, informing OT that people are using Visibly every day and every hour. “The number of tests we have delivered is constantly changing – we have experienced a 100% growth rate from 2017 to 2018,” he confirmed.

Then one day a patient asked, ‘Why can’t I do this at home?’ Providing Dr Lee with a lightbulb moment, the optometrist combined his expertise in optometry with his knowledge of software applications and began to develop the concept of Visibly.

The main aim of Visibly is to “create technology and solutions that allow us to provide eye care to anyone, anytime, anywhere,” Mr Jimoh explained.

“We really want to break down the barrier of time, convenience and cost when it comes to eye care, while, of course, maintaining the same level of accuracy,” he emphasised.

The test takes between seven to 15 minutes depending on the patient’s vision. “It’s a dynamic test, so depending on how well you see, how comfortable you are and the pace that you want to go, we see people completing it within a range of these times,” Mr Jimoh shared.

We really want to break down the barrier of time, convivence and cost when it comes to eye care, while, of course, maintaining the same level of accuracy

The test is free to take, but patients pay for a prescription. There are criteria that prospective patients must meet to be able to take the test. This includes the patient being aged between 18 and 55 and having no medical conditions that could impact their vision, such as diabetes. Visibly will also only provide prescriptions between -10.00 and +3.50 in spherical strength, -0.25 and -3.00 in cylinder power and +0.25 and +4.00 in add power. Therefore, if a patient’s previous prescription beyond that, they will not be eligible.

Visibly is very clear when it comes to its prescription capabilities. The level has been set on the results of accuracy testing and the range has increased since its launch.

“The safety of the patient is key, and we keep that in mind throughout the whole process,” Mr Jimoh said. “Almost 15–20% of patients are deemed ineligible before they even take the test,” Mr Jimoh revealed, emphasising: “Upfront we are definitely referring a lot of patients back into the community and trying to link them up with one of our eye doctor partners to ensure they access the eye care they need.”

After the test is taken, Visibly has single digit rates of patients who are referred. “However, if they are, we will again recommend that they go to an opticians in person as their results are not reflecting what a common pair of eyes would perform,” Mr Jimoh said.

With eligibility confirmed, users create an account on the Visibly website, select the type of prescription they require (spectacles or contact lenses or both) and answer a series of satisfaction questions based on their current prescription and eyewear requirements.

The original test is a two-screen experience, a laptop or desktop computer taking on the role of a digital eye test chart and a mobile acting as a remote control. The screen then undergoes a calibration process to ensure that it displays characters at the precise 10mm size regardless of the screen size or resolution that is being used.

Visibly has recently launched a single device version of the test, which allows the patient to take a voice-guided test on just a mobile device.

Visibly asks patients their shoe size and then informs them how many steps they need to take to ensure they are precisely 10 feet from their screen, which Mr Jimoh said has proven to be an effective method.

“We tested this technology with thousands of users and found shoe size measurement to be the most effective for maintaining accuracy when ensuring users are 10 feet from their screen when they complete the test,” he said.

Text and voice instructions are then given to the user and the test begins.

Whilst it sounds simple enough, Mr Jimoh admits that it has taken the company a number of years to develop and hone the software that is required. “It was hard. We went through around 20 major software versions of the test and that doesn’t include some of the very early prototypes,” Mr Jimoh shared.

Visibly promises a result in 24 hours, “but many of the results are sent within a few hours,” Mr Jimoh told OT.

Discussing who is using the platform, Mr Jimoh describes the Visibly patient as, on average, between 24–34 years of age and tech savvy. He notes that it also has a large demographic of mothers who have “gravitated to our service because time is of high value to them. If they are able to do the test at home, it’s been a huge time saver for them.” 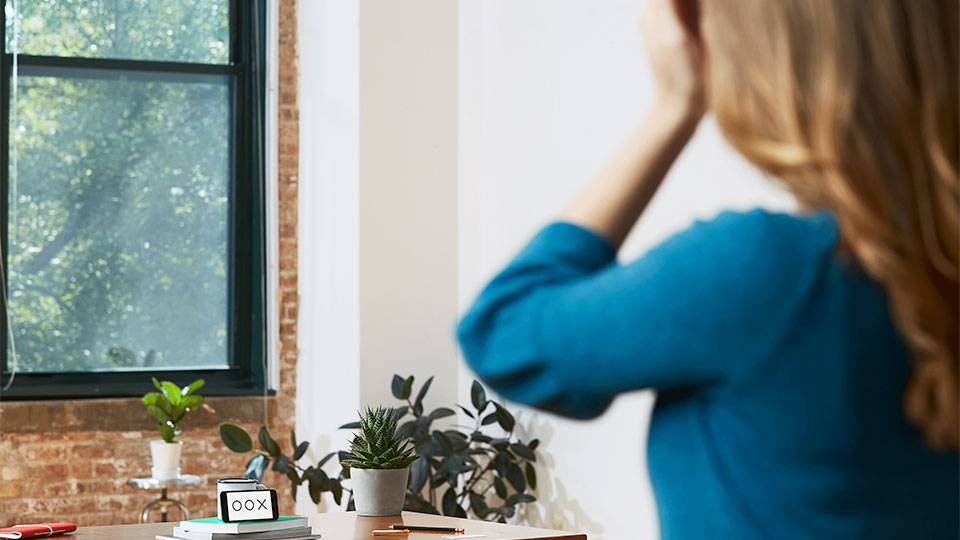 Key to Visibly’s offering are optometrists.

“We could not do what we do without our eye doctor partners. We don’t just have people take a digital test and then print out a prescription; every test is reviewed by a licensed eye doctor,” Mr Jimoh stressed.

“We should be thankful that in the UK there is a clear and conscious coupling of healthcare and refractive status. The Opticians Act protects this in primary legislation and ensures that all those presenting for a sight test (as called in the Act) also have an examination of the eye and adnexa. Anything that may decouple this vital synergy could result in poorer health outcomes for patients, with potential for more sight loss than there needs to be. Sight tests in the UK are accessible, affordable and of a high quality. We should keep it that way.”

“Online eye tests will for sure feature in the UK, Opticians Act or not. Sadly, the technology will be available online and can easily be provided from countries where no regulation exists. It’s our view that online eye tests will gain more traction over the next five to 10 years, but this is not to say they won’t start to appear within the next two. It’s the role of independent optometry to differentiate by humanising technology, to provide an enhanced eye examination and to do all the things that the online eye test cannot. Central to this will be the practitioner and their ability to listen, empathise and educate patients, whilst working together as one team to find new ways to delight and help people genuinely live life as fully as possible.”

Visibly currently has “a couple of dozen” retail partners across the US, but Mr Jimoh revealed that the number is growing rapidly. “If we spoke in a month, that could be up to four dozen,” he said.

Commenting on the reaction of the US profession to an online vision test, Mr Jimoh admitted that early reaction was mixed. “However, over the last year we have been building new solutions for eye doctors to use and it is definitely more of a positive relationship now,” he added.

Visibly has a “remake” rate that is on par or lower than the industry standard, Mr Jimoh emphasised. “We have had a lot of success as a result of the years of testing that we did with this software before release. We have patient satisfaction percentages in the 99% range,” he added.

Accuracy is key for Visibly and in the three years that it took to develop the concept into a model that could be released to market, the company tested their software on “thousands” of patients.

These tests saw patients undergo a traditional phoropter test, a prescription be determined, a trial frame made and the prescription rated on satisfaction. They would then take part in an online vision test, with the results and satisfaction levels compared.

“While during the research and development phase, traditional methods outperformed our test massively, as we optimised algorithms, we reached the point where our test produced results on par with traditional methods, which we were able to confirm with statistical significance,” Mr Jimoh said.

If test results are as accurate as traditional methods, why does Visibly say it is not a replacement for an eye health examination? Mr Jimoh explained: “You can go for a phoropter test at three different optometrists and each have slightly different results. Therefore, our goal is to make sure that patients are seeing well and we are not getting too caught up in our numbers completely matching.”

Mr Jimph emphasised that, today in the US, 99% of people use traditional methods to access their eye care, while there is also a large proportion who are not accessing eye care at all. “Visibly can help both of these types of people,” Mr Jimoh said.

Therefore, when asked about the future of Visibly, he said: “We want these remote technologies to be ubiquitous in the US and to be well-known and popular around the world. We want to be the leader, but we know there will be competitors coming in to this space. As long as we are bringing great outcomes to patients and helping provide eye care to those who otherwise may not be able to access it, that is a great thing.”

Mr Jimoh confirmed that Visibly is currently in the process of translating its software for Spanish and German speaking users, as well as to other English-speaking countries globally where the law permits.