“Eyeris allows me to make my visits more patient centric”

What was the inspiration behind Eyeris – the company’s platform for clinical data record keeping?

Nick Wingate (NW): We decided about nine years ago that we needed a better way of record keeping because our method of practise had changed. Instead of going to nursing and residential homes, the business decided to see patients in their own homes. Consequently, we needed to be able to have a much easier way of getting clinical data back to the office in Swindon, as well as processing the patient’s orders, which was a very manual system back then.

We needed a way of being able to get really high quality clinical records and while also providing a great service to a very different group of patients, which is why we decided to change to electronic records. We were seeing patients who were very similar to patients who would normally attend a High Street practice, but they couldn’t because of their physical or mental disability. We felt they should be receiving the same level of service in their own home as they would be getting on the High Street.

What feedback did you receive from optometrists during the development of Eyeris?

NW: The original concept was designed by two optometrists. We’re fortunate to have our own IT department, so Eyeris is written in-house at The Outside Clinic. The brief was to think about what an optometrist wants, and how those optometrists can get that information across to the IT department, who make the system work. We consulted with colleagues, who had used other electronic record keeping systems, and listened to the things they liked and disliked about those systems. The most important thing that people wanted was to be able to have all of the information on one screen. If you need to add more information, you can click on that field and expand to a larger window for inputting data.

What features did you want to incorporate into the system?

NW: We had to have portability because domiciliary optometrists have to carry an awful lot of equipment around. We needed a system that replaced all the bits of paper that we had to write on. Eyeris replaced paper records but also it helped with printing out General Ophthalmic Services sight test forms, prescription forms, optical vouchers, receipts, referral letters, and so on. We tried to reduce the amount of time that a practitioner spent doing administration.

The vast majority of our practitioners work on their own in our super-optom roles. They don’t have an assistant with them, which is how we used to practise. When we switched to seeing patient’s in their own home, we decided that with the right technology we could just utilise the optometrist to do the whole appointment. This meant we need to make the admin side of things as efficient as possible. It has enabled the optometrist to focus on the patient and note down all the clinical findings and recommendations.

What needed to be considered specifically for domiciliary visits?

NW: The Outside Clinic optometrists need connectivity. Previously, we would have had to wait for paper records to come back to the office via courier. Now, we can see clinical records within about half an hour of that practitioner completing that appointment. From a customer service point of view, it has massively improved purely because we have the data more quickly.

How does the device aid optometrists in ensuring the best clinical outcomes?

NW: The Eyeris system requires data to be filled in on each particular aspect of the record. If the practitioner has not completed any aspect of the data, the system will not let you move onto the next screen and start the administrative tasks. It will highlight the particular area that the practitioner has either not put enough or any information in.

We encourage practitioners to make their own clinical decisions as to whether a test is or isn’t required for a particular patient. We require them to explain why they have done some in the outcome of that test, but they may choose to have not done a particular test and consequently they need to justify why. That’s where the system protects the practitioner because they need a proportion of information in each field to make it acceptable from a record keeping point of view. 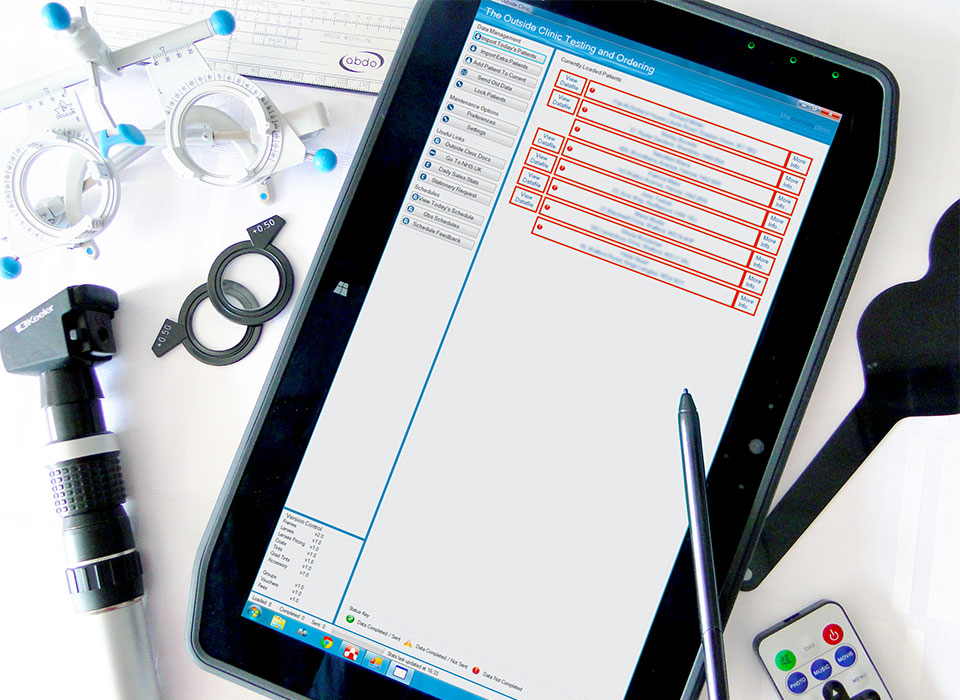 How do you use Eyeris when providing domiciliary care?

Matt Burford (MB): Eyeris allows me to make my visits more patient centric. When we used to do things with paper records, you had to withdraw a lot to make notes. You need comprehensive notes when making domiciliary visits as patients may not have the best memory or their next of kin might be involved. Eyeris allows me to maintain patient focus, which is important for patients who are hard of hearing, for example. I’m able to maintain eye contact, so they can see my lips when I’m speaking to them. I use it throughout the visit –  from the sight test to dispensing. It’s hands-free during both of those processes as well, which eliminates user error.

How has it changed the way that you work?

MB: I started with The Outside Clinic about 14 years ago when it was all paper records. Eyeris allows legible records and it eliminates a lot of errors commonly found in a paper record. If you don’t put information into a section on Eyeris, it will prompt you and ask if you’ve considered it before moving on. With a paper record, you’re more open to human error, whether it’s legibility or a plus or minus on a prescription for instance.

What features of the device help you with record keeping?

MB: The Outside Clinic encourages its optometrists to set their own preference buttons, so you can click into each section of a record card. It’s presented as an A4 sheet and you can click history and symptoms, for example, where a text box will pop up to input those patient details. There are pre-defined buttons, such as flashers and floaters, but each optometrist will put in their own buttons as we all have different ways of asking questions. If you need to, you can go back in and amend it to make it even more patient specific. It allows the administrative side of the job to be focused on less and more on the optometry side of it.

You have to have a full and thorough account of what has happened, especially with domiciliary visits

How does it help you avoid clinical pitfalls?

MB: The landscape of optometry has changed somewhat since I’ve been with the company and you need that extra level of detail on your record cards now. Eyeris forces you to address each area when prompted.

If you were to press on ‘ophthalmoscopy’ and you click ‘low view possible,’ it will come up with a prompt asking if you’ve considered dilating the patient. If a patient has previously had prisms in their prescription and you get to the end without it, it will ask if you meant to omit them or forget to input them. It holds your hand during the process while maintaining clinical judgement.

Why is it important to increase the standards of record keeping in optometry?

MB: You have to have a full and thorough account of what has happened, especially with domiciliary visits. As a society, there is greater litigation and a need for practitioner protection, as well as for patients. The more information you can put on the record card, the more you say what actually happened and explain your thoughts for doing, or not doing, things. Eyeris offers better protection for the business, the optometrist and the patients.