What does the future hold for optics?

Describing a picture of the profession that is yet to be painted can be difficult. OT  spoke to a trio of practitioners who were willing to give it a go

Predictions can be evidence-based, they can derive from science, or they can purely be a stab in the dark – usually they are a combination of all three. Ultimately, they are made by a person based on their experiences and prior knowledge.

Asking three practitioners from differing backgrounds for their predictions for optics in five and 15 years-time garnered interesting results.

Mr Hamir established Kite in 2014 with the aim of bringing the “exciting” innovation and design that surrounded optics in Europe to the UK.

Kite’s Shoreditch-based store is home to the world’s first Eye Bar. The store focuses on the customer experience and is designed to offer people a place to enjoy a drink and peruse frames, with a one-to-one consultation with an expert stylist also available.

Drawing on the way Mr Hamir has developed his own business, the entrepreneur predicts that in five years time the customer “will be all about customerisation and eyewear that is tailored to them – the one-size-fits-all approach will be gone,” he mused.

This is a prediction Mr Hamir finds relatively easy to make as he explained: “Mass retailers need to accept this and embrace the customer of today because this is already happening in many other sectors. Optics is playing catch up and anyone who breaks into this idea will succeed.”

Looking beyond eyewear, but remaining in the customer’s shoes, Mr Hamir asserts that customerisation will stretch into the lens market as well. “Precision in optics, I feel, is an untold story. People want to see better and nowadays, with the technology that is available, you can really make lenses for the individual,” he said. It is the way that optics is selling and marketing this that is letting the concept down. “I don’t think it is good enough and as a result I don’t think customers are getting it,” he added.

Mr Hamir emphasised that the High Street is going through massive changes. “Every optical retailer needs to be looking at their business and asking how do we change?,” he said, explaining: “They need to look at not only how they are serving customers, but also their operating and commercial models. In the future, everything will have to be done around the consumer and I think that will be the biggest shift in this space over the next five years. Whoever nails that is going to do well, whoever doesn’t is going to suffer.”

For optometrist Paul Morris, director of professional advancement for Specsavers UK and ROI, there will be many greater threats in optics in five years time.

“We will be fighting new competitors,” he declared. “Online glasses retailers will proliferate, and it will become even more acceptable for the consumer to purchase eyewear in this way,” he said.

Expanding on his prediction, Mr Morris explained: “We can see how trends are already changing, with the majority of people making their purchases using their smartphones nowadays. I think this will carry through into optics. I think that the technology that enables online dispensing will sharpen and we will face a little bit of struggle in the traditional model from online suppliers.”

For Mr Morris, a challenge to the profession’s perceptions on what the industry should be is not a bad thing, while it can be grateful that elements of legislation, including the Opticians Act, exist.

In five years time Mr Morris does not see the Opticians Act being fundamentally changed. Yet if and when it comes up for review, the optometrist emphasised: “We will need to be on our game to make sure the profession gets a good deal.”

Offering support when it becomes to online retailing, Mr Morris said: “I think the best way to defend against an online product supplier is to focus on experience. I think we must look at ways of relationship marketing and making the experience so memorable and so valuable to them that they won’t go elsewhere.”

"In 15 years, what will glasses cost,” he asked: “£50, £100, would you even buy glasses, would you hire them? There are so many different models that could be explored"

Having acquired an independent practice in 2004, Dr Martin Smith has almost 15 years experience as a business owner and has already observed a number of changes to the profession.

In five years time he still believes that the majority share of his practice’s turnover will still be made from the selling of spectacles. “Five years is too short of a time period for the large clinical regulatory changes that are required to happen,” he shared.

Therefore, both inside and outside of the testing room: “Independents will need to differentiate themselves well from the multiples or they will begin to struggle,” he said. 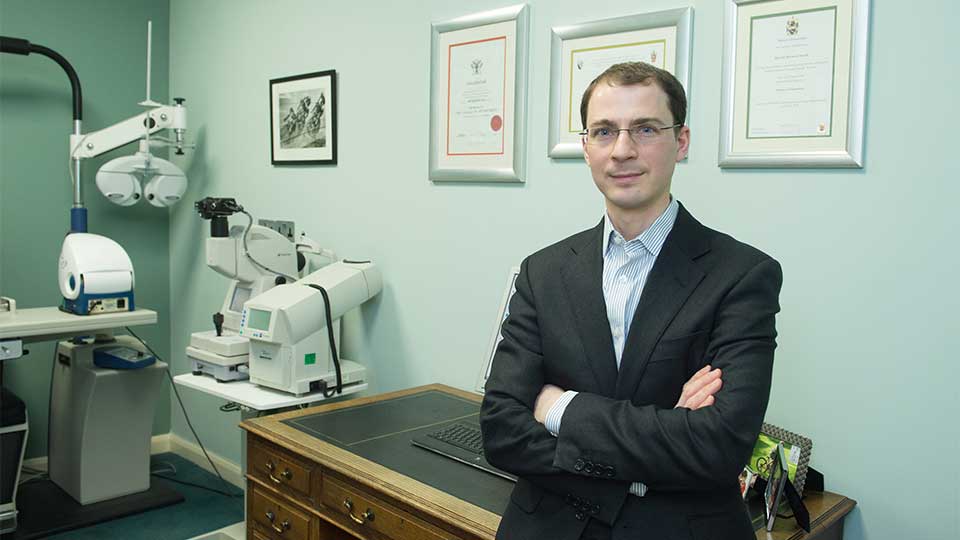 Bearing in mind that 15 years ago, the first iPhone had not yet been created and to date Apple has released 14 versions of this sector-changing technology, a lot can be achieved in this timeframe.

When making their predictions this trio of practitioners did not hold back.

Focusing on eyewear, for Kite’s Mr Hamir, it is only going to become more and more established. “If we think of trends, by then we will have stopped talking about myopia becoming an epidemic, and everyone will have it. Short-sightedness will be here and everyone will need glasses and vision correction,” he said.

Painting a future where everyone needs glasses means people will own multiple pairs Mr Hamir believes – “we are already seeing that at Kite but it will be prolific by then,” he said

On cost, Mr Hamir asserts that pricing models will change and predicts that as technology improves there will be a democratisation of glasses. “In 15 years, what will glasses cost,” he asked: “£50, £100, would you even buy glasses, would you hire them? There are so many different models that could be explored,” he shared.

Technology also has a role to play in eyewear in the future. “This part of your head is prime real estate so what you can put on your eyewear will change,” Mr Hamir said. While he feels that Google Glass failed for a reason “when it comes to speakers or sensors, it will be interesting,” he said.

In terms of technology, Dr Smith feels that lens technology has a large role to play in optics in 15 years time. “The current market in spectacle frame and lenses is really exciting. We have started prescribing lenses that are corrected for high order aberration and that’s an amazing development – something that we couldn’t previously correct, we can now correct. So just imagine where this could be in 15 years time,” he said.

Optics in a box

Mr Morris looks across the pond when predicting where optics in the UK will be in 15 years time. Highlighting US company, Opternative, who performed almost one million sight tests remotely, with no clinician involved, last year, this is where he sees the UK profession moving.

“Online sight testing and mobile sight testing will proliferate and ultimately, while we are afforded some protection in the UK by the Opticians Act, 15 years is a long time,” he said emphasising: “It’s a long time for people to lobby and for people who want to cause a disruptive influence to make their case.”

In 15 year, Mr Morris would be surprised if “some sort of scanner” had not been invented that allowed the consumer to “stick their head in a box,” with a scan taken and anaylsed by artificial intelligence that would tell them all about their eye health.

“We have seen lots of people, such as Google DeepMind and IMB, moving in that direction. It’s not beyond the wit of man for that one box to be testing vision and eye health all in one place – 15 years ago is a long time. 15 years ago I think I was using a Nokia 8210,” he laughed.

The future of GOS

For practice owner Dr Smith, the next 15 years is about “getting patients and the NHS used to the idea that optometrists can provide very good services in the community.”

Making his predictions, Dr Smith said: “I want to sell spectacles as a side line and I want to be paid well for what I actually do, but this can only happen through GOS changes.”

Expanding on this, Dr Smith said: “There are a few ways that could happen – we can change the NHS contract so we can top up our GOS fee, which we are currently forbidden from doing; or we could abandon GOS altogether, but that has to be a mass leap from all.”

With the introduction of these clinical services, we need to get paid properly for them,” he stressed.

Where do you predict optics will be in the future? It is time to place your bets.