The truth about false positive referrals

Identifying eye diseases such as glaucoma is a core purpose of the sight test, and referring suspected cases of disease to hospital for further tests and treatment is a key part of the primary care optometrist’s role.

Sometimes these cases are found not to need treatment after further testing at the hospital. And sometimes people argue that the existence of these ‘false positive’ referrals shows that optometrists in primary care need to be better trained.

This is a mistake.

This page explains why a one-off test for low prevalence diseases like glaucoma will, by definition, lead to high false positive rates. It shows that, far from being incompetent, community optometrists are already very good at using a combination of tests, information from the patient, and professional judgment, to keep unnecessary referrals to a minimum.

It also explains how the NHS in England could facilitate a significant further reduction in the number of false positive referrals to hospital if it funded more checks, such as repeat measures and referral refinement schemes, in community practice.

For most low prevalence eye diseases, a 50% false positive rate is good

Disease detection is often described in terms of sensitivity, specificity and positive predictive value (PPV). Sensitivity is how good we are at detecting the condition. Specificity is how good we are detecting those without the condition – in other words, avoiding false positive referrals. PPV is the simple proportion of those referred who have the condition, and it is this that can appear low at times. This ignores the problem of a low prevalence condition, which is that if the proportion of those without a condition is very large, then even a tiny percentage false positive rate will lead to a high number of false positives.

Thankfully, some common eye diseases only affect a small proportion of the population. For example, glaucoma, which accounts for over 10% of registrations of visual impairment and around a quarter of ophthalmology outpatient visits, has a prevalence of only around 2% in the UK population over 401. The prevalence of age-related macular degeneration (AMD), the most common cause of sight loss among older people, varies by age group. NICE quotes 2.4% among 50+, 4.8% in 65+ and 12.2% in people aged 80 or over2.

In diseases with such low prevalence rates, in order to get as low as a 50% false referral rate, optometrists in primary care actually need to achieve around 98% accuracy in their testing procedures. Given that no single diagnostic test is that accurate, it is clear that optometrists are using a number of tests and their professional judgment to achieve such high accuracy.

This is how that maths works in a disease with 2% prevalence:

A visual representation of the maths

Our infographic shows how this works 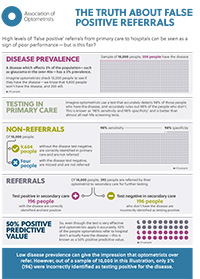 There are proven ways further to reduce false positive rates, but these are not routinely funded in England

Further investigation (also known as repeat measures) by optometrists in primary care before they refer a patient to hospital has been shown to make false positive referrals less likely. Parkins and Edgar3 showed that it meant 76% of suspect glaucoma patients were not referred, and produced a 62% financial saving in Bexley. Davey et al4 found patients were 2.7 times less likely to be referred in Bradford. Ang et al5 found that in the six months after the introduction of the new GOS in Scotland, which includes these repeat measures, there was a statistically significant increase in true-positive referrals (from 18.0% to 31.7%) and a decrease in false-positive referrals (from 36.6% to 31.7%).

Referral refinement schemes are another way to reduce false positive referrals. In these schemes, patients who show signs of glaucoma in an initial test are reviewed in the community by specially trained optometrists. Ratnarajan et al6 compared two places with referral refinement schemes (Manchester and Gloucestershire) and two areas that did not have them. The first-visit discharge rate (FVDR) (patients who were false positives) was 14.1% where the schemes were in place compared with 36.1% where there was no scheme. Henson et al7 also describes the Manchester scheme, which has been in place since 2002, and reports that the number of false positive referrals was reduced by 40%.